Last year I visited the former Troposcatter receiver site at Kempis Mountain for the first time, where the signal from Relay was received from the Mid-Canada Line farther north, and shunted to North Bay via land-line.  Realistically, I don't know how many other Mid-Canada Line related sites I'll be able to reach.  Hopfully Relay Ontario (MCL Site 060) next year, we'll see.
However, I've made contact with someone who worked on the Mid-Canada Line, is local to Ramore, and who's been able to pinpoint for me where the Ramore GATR Site was.  Mike has lots of stories about his time on the Mid-Canada Line.  The more stories I hear of the Mid-Canada Line and Pinetree Line, the more I realize there are vast volumes of untold Canadian stories that are waiting to become books, biographies, and screenplays.
Originally published on Larry Wilson's Mid-Canada Line "War Stories" page on his web site here and here I've reposted Mike Milinkovich's stories below, with Mike's permission.

I opened the MCL “War Stories” to read and was struck by how many people wrote of their experiences at 309 DDS! I’m not superstitious, but I really wonder if there were “spirits” other than those found in a bottle that made 309 DDS their home?
I was the first 309 DDS “tech” or the “Installation & Maintenance Representative” as Ma Bell called us. After graduating from the third wave from the MCL School in Montreal as a bright-eyed and bushy-tailed 20-year old I arrived on site in the early fall of 1956.
I lived in a tent for the first 3-4 months while the living quarters and equipment/power rooms were being built. After 53 years I would like to relate some of my experiences, events and occurrences that some may find interesting. 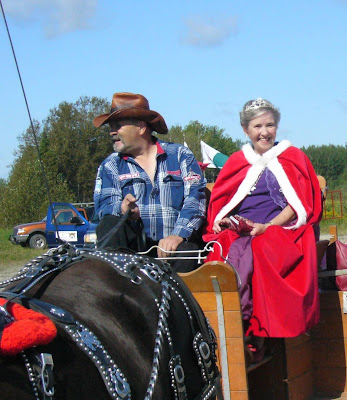 These are just some of the stories from a time in my life when every day was a wonderful challenge and every experienced was relished. I felt so lucky that I was able to travel to the far north and see a part of Canada that few Canadians ever have a chance to see. After the Mid Canada line, I worked on the DEW line on Baffin Island and Winisk and finally on the Pine tree line where I visited each military radar site in Canada from Holberg on the tip of Vancouver Island to Newfoundland. I was on loan to the DND Inspection Services on the Pine tree line. It was during one of my Mid Canada assignments South of Matheson Ontario at site 070, Kempis Mountain, that I met and married the most beautiful and wonderful girl in the world and we are still together. Below is a picture of her at 68 years old as the “BRM Belles” Red Hat Queen at the Matheson Fall Fair.

Mike also happens to be the Mayor of the township surrounding Ramore; The Township of Black River-Matheson.  Since Mike worked along the Mid-Canada Line and at Kempis Mountain, it seemed appropriate that in 2009 when the site was shut down, he was involved, and wrote this.


November 12, 2009 is the day that the final chapter was written about the “Cold War” that began just after WW II between the Soviet Union and the Western allies. I began work at Kempis Mountain in the late 1950’s and participated in the ceremony on November 12th that signalled the final chapter in the history of “Mid-Canada Line site 070” in the Township of Black River-Matheson.

The establishment of the North American Air Defence Command (NORAD) coincided with the flight of Russia’s Sputnik I (the first man-made object shot into space orbit) and the successful launch of the first Soviet Intercontinental Ballistic Missile (ICBM). The Canadian and American government’s agreement to create NORAD to counter a Soviet nuclear-armed bomber threat was reached in August 1957 and formally signed in May 1958.

In 1955-56, Kempis Mountain, also known as Mid-Canada Line site 070 was built. Site 070 was the last link of a chain of Mid-Canada Line communications sites that stretched north to Hudson Bay. Site 070 was not a radar site but a communication site linked to similar sites at site 060 (also called Relay and located 80 miles North of Cochrane), site 050 at Ft. Albany and finally to site 415 located at Cape Henrietta Maria on the western shore of James Bay.

Data that was collected by the Mid-Canada Line Doppler Detection Sites (Radar sites) was transmitted south from site 070 by land line to the “Hole” in North Bay. The “Hole”, as it was called, was the co-located headquarters for the northern region of NORAD. The other NORAD headquarters site was located in the Cheyenne Mountains in Colorado. Together, these two sites controlled North American defences against potential threats from the air by analyzing data and information from the northern radar lines to determine if jets had to be scrambled to meet potential threats from attacking forces.

During the construction of site 070 and during the years it was manned, people from the Township of Black River-Matheson played a big part. The road up Kempis Mountain and the levelling of the site for construction was done primarily by the late Vic Hembruff’s company now called R. J. Lougheed Trucking Ltd. and currently owned by Bob Lindsay. Much of the concrete work and construction was completed by a company called H & D Construction and owned at the time by the late Ernie Dambrowitz and Floyd Hembruff. Sadly this company no longer exists. Many people from the towns of Holtyre, Matheson, Ramore, Shillington and Val Gagne also worked for years at various occupations at the site.

Unfortunately one of the dangerous legacies left behind at all the sites across Canada including site 070 is an organic chemical compound called “Polychlorinated biphenyl” or as commonly known, PCBs. This chemical was commonly used for many years in various types of electronic equipment installed at all the sites. In addition, tests were conducted to identify Hydrocarbons and metals and when found were removed.

You may ask, “So what’s the big deal?” The big deal is that PCBs are classified as “persistent organic pollutants” meaning PCBs never degrade or disappear but persist in the environment and accumulate in human and animal tissue. The only way to get rid of it from the environment is to remove it and destroy it by various methods at specially designed facilities. PCBs can cause serious health problems in humans and other mammals such as lowering of the immune system, birth defects, health problems such as cancer and diabetes or a failure by males to reproduce.

By the end of the project the team had removed over 17,000 tons of material from Kempis Mountain. This material was trucked to sites in Quebec and other locations in Ontario for proper disposal. In total 2342 samples of soil, leachate, hydrocarbons, concrete, bedrock, PCB wipe tests for non-porous materials and water were tested for contaminates.

As Mayor, I was honoured to be asked to participate in the closing ceremonies to represent the Township of Black River-Matheson and also from a personal perspective as one of the “survivors” whose site 070 story began over 50 years ago. From 1956 to 1961 it was my privilege to have worked on all three Radar lines; MCL, DEW and Pinetree. I worked in every Province in Canada from the tip of Vancouver Island at Holdberg to Newfoundland and Labrador, in the Northwest Territories and further north above the Arctic Circle on Baffin Island. This experience profoundly cemented my deep love and appreciation of this wonderful country of ours at an early age.

We should all be thankful that the Federal and Provincial governments have agreed to work together to fund the cleanup of this cold war era mess so future generations of Canadians will be protected. In particular the Ontario government’s Ministry of Natural Resources (MNR) and Minister Donna Cansfield should be congratulated for becoming the lead agency in coordinating the cleanup efforts.

I wish them luck and God speed in cleaning up all the other sites in Northern Ontario.

What's all this about anyway?

My intent by making this blog is to provide information for others who are interested in visiting and exploring the sites of former Cold War military facilities in Canada, and their surroundings.

My personal goal is to visit (and camp when possible) at all of the locations where the Pinetree Line stations were across Canada, and along the way visit the microwave repeaters, troposcatter repeaters, airstrips, and other supporting facilities. As a lot of these places are far from civilization, and often on the top of local hills or mountains, I hope to see the relatively the same view the men and women of the USAF and RCAF saw in from the 1950s to the 1980s.

If you would rather reach me directly than comment on an individual blog post, email me at steffan.watkins@gmail.com